Guterres, 67, served as prime minister from 1995 to 2002, and was UN high commissioner for refugees from June 2005 to December 2015. He was formally named the world’s top diplomat in October and will start his new role Jan. 1.

The swearing-in ceremony is expected to start at 10 a.m. ET in the UN’s General Assembly hall in New York City.

Guterres was selected through a new process, which included the first-ever televised town hall debates between the 12 candidates. The selection process was changed to allow public discussion and more transparency about how the secretary general is chosen.

Guterres will take over from Ban Ki-moon, secretary general for the past decade. 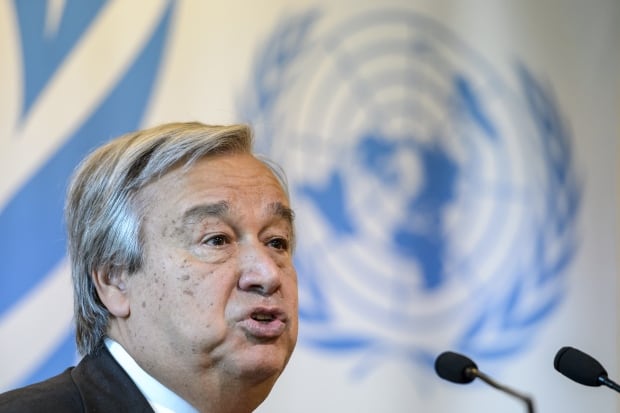 Antonio Guterres, former prime minister of Portugal who served as UN high commissioner for refugees from June 2005 to December 2015, will be sworn in as UN secretary general on Monday in New York City. (Fabrice Coffrini/AFP/Getty Images)

Ban praised the man who is replacing him.

“Secretary general-elect Guterres is well known to all of us in the hall. But he is perhaps best known where it counts most: on the front lines of armed conflict and humanitarian suffering,” referring to his time as head of the UN refugee agency,” Ban said.

As head of the UN Refugee Agency, Guterres made the agency more efficient and introduced needs-based budgeting, during an increase in people displaced by conflict, particularly in Syria, Iraq, South Sudan, the Central African Republic and Yemen.

He had said the world was too slow to respond to the world’s refugee crisis and only took notice once refugees started arriving in Europe.

“Unfortunately only when the poor enter the halls of the rich, do the rich notice that the poor exist,” Guterres said in September 2015.

Before joining the UN, Guterres spent more than 30 years in public office in Portugal.

Guterres left his job as a physics professor in the 1970s to join the revolution and help form Portugal’s centre-left Socialist Party. He says got involved after volunteering in the slums of Lisbon and seeing the social problems in the last years of Antonio Salazar’s four-decade dictatorship.

He was first elected in 1976 and chaired various committees, and was named party leader in 1995.

As prime minister, Guterres was involved in resolving the crisis in East Timor and co-chaired the first European Union-Africa Summit.

When he was selected for secretary general, Guterres said he decided to leave political life because “if you really want to do things, there is a moment in which you discover that it’s probably better to let others do it.” He was still president of the Socialist International, but said he really wanted to do humanitarian work at the global level, so he applied to be the UN refugee chief and got the job.

The 10 years as high commissioner were “the most remarkable experience you can imagine,” he said. “It’s the most fascinating work you can have, very demanding … and I gained a lot of experience in dealing with all crises and all governments” involved in crises everywhere.

After his term ended, Guterres said, he felt an obligation to do something, “having had this dramatic experience of dealing with people that are suffering enormously” as refugees and having no solution to their plight.

He said the place where he could probably contribute the most to solve that problem and other global crises was at the United Nations, so he decided to apply to become secretary general.

“If I get it, I will do my best to be useful and to pay back the talents that I received.”

Guterres is married and has two children. He is fluent in Portuguese, English, French and Spanish.

He said his 10 years as UN high commissioner for refugees, which ended in December, were “excellent preparation” for a secretary general, who needs to be an honest broker and be seen by countries as independent in order to promote consensus and overcome crises.