State Dept. to Remove Sudan From List of Terrorist States

The move clears the way for the African nation to seek international assistance and potentially to normalize relations with Israel, which officials said could happen in days.

WASHINGTON —(nytimes)– The State Department will take Sudan off a list of countries that sponsor terrorism, clearing the way for the East African nation’s fragile government to seek international assistance and, potentially, normalized relations with Israel — a diplomatic goal for President Trump before the election next month.

Mr. Trump on Monday announced the decision, which had been formally discussed between the United States and Sudan since 2018, after several months of intensified negotiations by the White House.

Removing Sudan from the terrorism list was a necessary precursor to it becoming the latest Arab state to broker an official détente with Israel. Two U.S. officials said that Sudan and Israel could normalize relations in days, once details of the removal from the terrorism list were completed. The carefully choreographed sequence was intended to soften likely criticism of the Israel deal inside Sudan.

Mr. Trump, grasping to remind voters of his foreign policy achievements, has likened the diplomacy to peace agreements that could cool generations of tensions across the Middle East and North Africa.

“GREAT news! New government of Sudan, which is making great progress, agreed to pay $335 MILLION to U.S. terror victims and families,” he wrote on Twitter. “Once deposited, I will lift Sudan from the State Sponsors of Terrorism list. At long last, JUSTICE for the American people and BIG step for Sudan!”

Only three countries — Iran, North Korea and Syria — remain on the State Department’s list of state sponsors of terrorism.

As a condition of removal from the list, Sudan has agreed to pay $335 million to compensate victims of Qaeda attacks on United States Embassies in Kenya and Tanzania in 1998 and the Navy destroyer Cole in 2000. The money will be held in an escrow account until Congress agrees to give Sudan immunity for other terrorist attacks.

Sudan has been on the list since 1993, when the American authorities concluded that the country’s leader at the time, Omar Hassan al-Bashir, gave refuge and other help to Hezbollah and Palestinian militant groups that the United States considers terrorists. American courts have also concluded that Sudan was complicit in the attacks on the embassies and the Cole.

But officials in Sudan’s fragile transitional government have been divided on whether to formalize diplomacy with Israel — a condition the Trump administration introduced at the 11th hour as part of a frantic, pre-election drive to persuade or pressure Arab nations to drop their historical enmity with Israel.

As recently as last week, Prime Minister Abdalla Hamdok of Sudan said he opposed doing so. He had previously warned that the perception of being pushed into an American-backed, election-eve agreement with Israel could fuel unrest in his country, which is simmering over a severe economic crisis in which annual inflation soared to 212 percent last month, with shortages of food, bread and medicine.

“Washington has been very focused on what it wants to get out of this and hasn’t been sensitive to the challenges inside Sudan,” said Cameron Hudson, who formerly worked on Sudan issues at the State Department and is now a scholar at the Atlantic Council think tank.

It was in Khartoum, the capital of Sudan, after the Arab-Israeli War of 1967 that the Arab League announced its “three no’s” resolution, which opposed peace, negotiations and recognition of Israel. That resolution was widely recognized among Arab states until President Anwar el-Sadat of Egypt made a historic trip to Jerusalem in 1977. 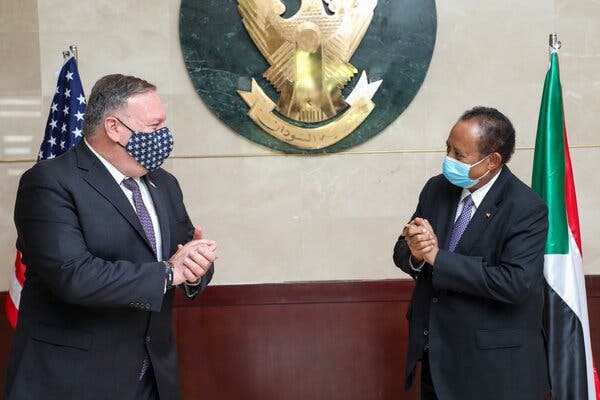 Yet until last month, Egypt and Jordan were the only two Arab states with formal diplomatic relations with Israel. That changed in September, when Mr. Trump helped cement normalized relations between Israel and the United Arab Emirates and Bahrain, although the two countries already had some security and economic ties with Israel.

Israel also has quietly worked to warm relations with Sudan over the past year.

Secretary of State Mike Pompeo seized on the thaw in August. Traveling to Khartoum on the first official direct flight from Tel Aviv, he personally broached with Mr. Hamdok both a détente with Israel and the terrorism list removal, the State Department said.
Sudanese officials described the encounter differently. Mr. Pompeo told Mr. Hamdok that his country had to recognize Israel immediately if longstanding negotiations over Sudan’s removal from the American terrorism list were to succeed, said a senior Sudanese official, who spoke on the condition of anonymity to discuss the talks.
Election 2020 ›
As a further incentive, Mr. Pompeo offered the Sudanese $80 million in humanitarian aid to help fight the coronavirus pandemic, an offer that Mr. Hamdok declined out of hand.

Since then, the Sudanese government has been torn between a desire to get off the terrorism list as quickly as possible, hoping to bolster its faltering economy, and fears that recognition of Israel could prompt political instability and collapse the country’s fragile democratic transition.

For the Trump administration, it is part of a campaign to score foreign policy achievements on the cusp of the American presidential election, and it included financial incentives for Sudan, which has been widely believed to be the next country to recognize Israel.

Officials familiar with the latest offer to Sudan said it would include humanitarian aid, 400,000 metric tons of wheat to alleviate the country’s food shortage and a promise that an American economic delegation would visit to consider potential investments in agriculture.

American aid to Sudan was limited so long as it was on the terrorism list. That designation also hindered the country’s ability to receive debt relief and international financial assistance, and, in turn, stunted foreign investment.

The United States has been on its own path to diplomacy with Sudan for years. After Mr. al-Bashir cut ties with Iran in 2016, American officials began easing sanctions against Sudan to reward its cooperation on counterterrorism missions and ending military attacks against its citizens.

Negotiations to remove Sudan from the State Department list had escalated over the past 18 months, as officials in the Trump administration and Congress saw an opportunity to support democracy after a generation of oppression, when Mr. al-Bashir was ousted.

“The people of Sudan courageously rose up to depose a longtime dictator in 2019, and since that time Prime Minister Hamdok and the transitional government have continued important steps toward democratic reform,” Senator Chris Coons, Democrat of Delaware, said in a statement on Monday, welcoming the decision to remove Sudan from the list.

But the compensation to victims has been snarled by politics.

The $335 million will not be released from the escrow account until lawmakers resolve whether Sudan should be held liable for its role in harboring Al Qaeda before the attacks on Sept. 11, 2001. American courts have not ordered the country to pay victims of those attacks or their families.

There is also a divide over an unequal distribution of payments for the victims of the embassy bombings that would award American citizens far more than Kenyan and Tanzanian employees — nearly all of whom are Black — who were foreign citizens at the time of the attacks.

With nearly half of their 45 million citizens living in poverty, Sudanese officials have said the country cannot afford to pay more than the $335 million that was negotiated with the State Department. Even that amount will not be held in escrow indefinitely, leaving lawmakers rushing for a resolution before Sudan is compelled to reclaim it — which one official said could happen early next year.

Riz Khaliq, a former Commerce Department official who was injured in the attack on the U.S. Embassy in Nairobi, Kenya, said the congressional dispute had reopened old wounds.

“It’s obviously encouraging that Sudan finally is accepting responsibility for the al-Bashir regime’s support of terrorism and is trying to make amends,” Mr. Khaliq said. “It’s as if Sudan recognizes all that we have suffered as a result of the bombing, but our own Congress does not. It’s painful that our own Congress cannot seem to get behind us and get this done.”