(abc) – As President Donald Trump and the Republicans in Congress gear up for another attempt at repealing and replacing Obamacare, an ABC News/Washington Post poll finds broad public preference for keeping and improving it — including high levels of support for some of its key components.

Just 37 percent of Americans in the national survey say Obamacare should be repealed and replaced; 61 percent say it should be kept and fixed instead. Even more broadly, the public by 79-13 percent says Trump should seek to make the current law work as well as possible, not to make it fail as soon as possible, a strategy he’s suggested.

These lopsidedly pro-Obamacare views are far different from the results of an ABC/Post poll in mid-January asking if Americans supported or opposed repealing Obamacare, 46-47 percent. That question did not offer “keeping and improving” it as an alternative — and it was asked before the contours of the first failed effort to repeal the law were known. 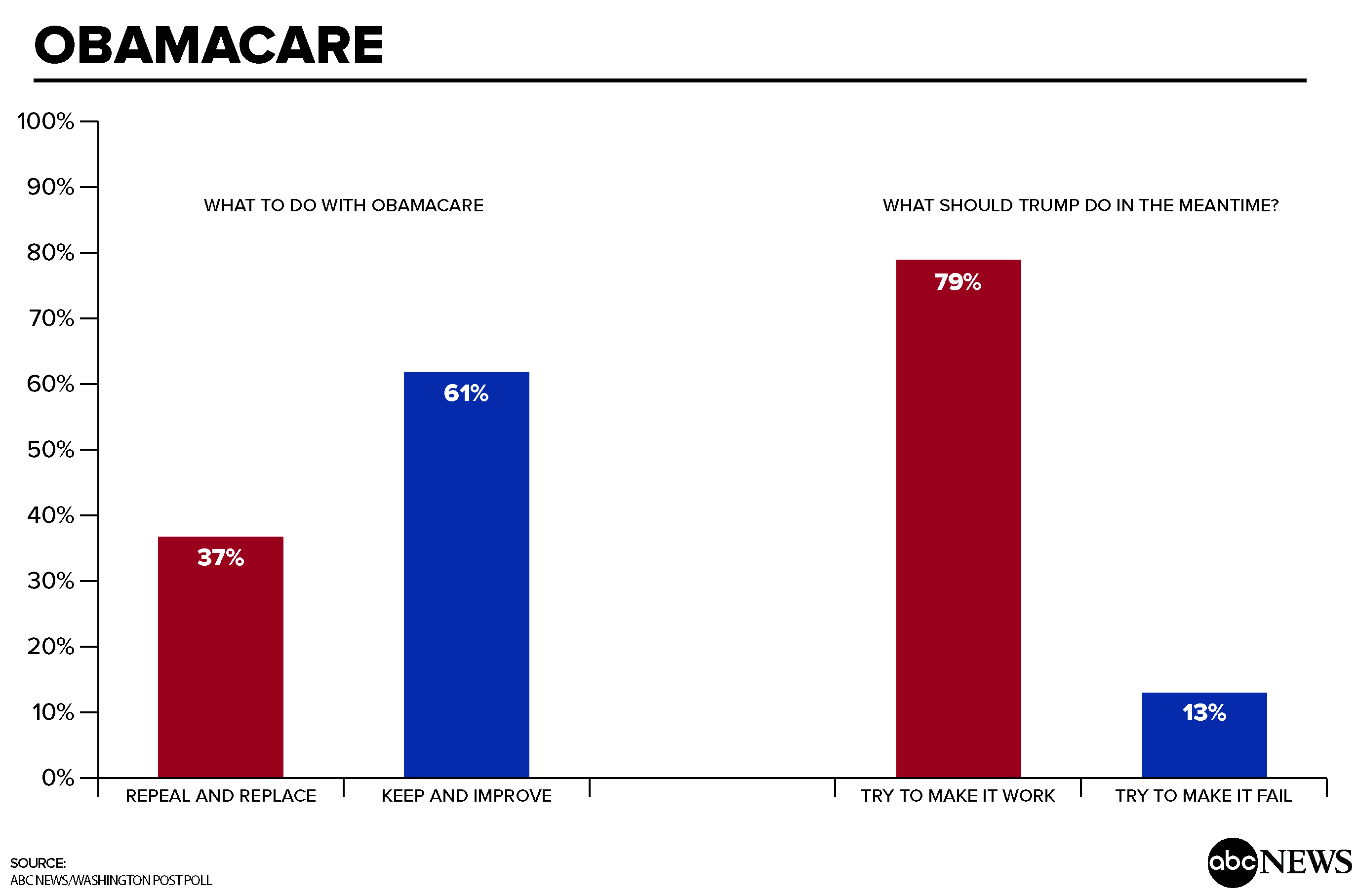 Obamacare’s rising fortunes are reflected in support for two key provisions of the law that Republicans have proposed changing in recent months. Americans by 70-26 percent say coverage for pre-existing conditions should be mandatory nationwide rather than left up to the states. Similarly, 62 percent prefer nationwide minimum insurance coverage standards (for e.g., for preventive services, maternity and pediatric care, hospitalization and prescription drugs); just 33 percent would leave such standards up to the states. 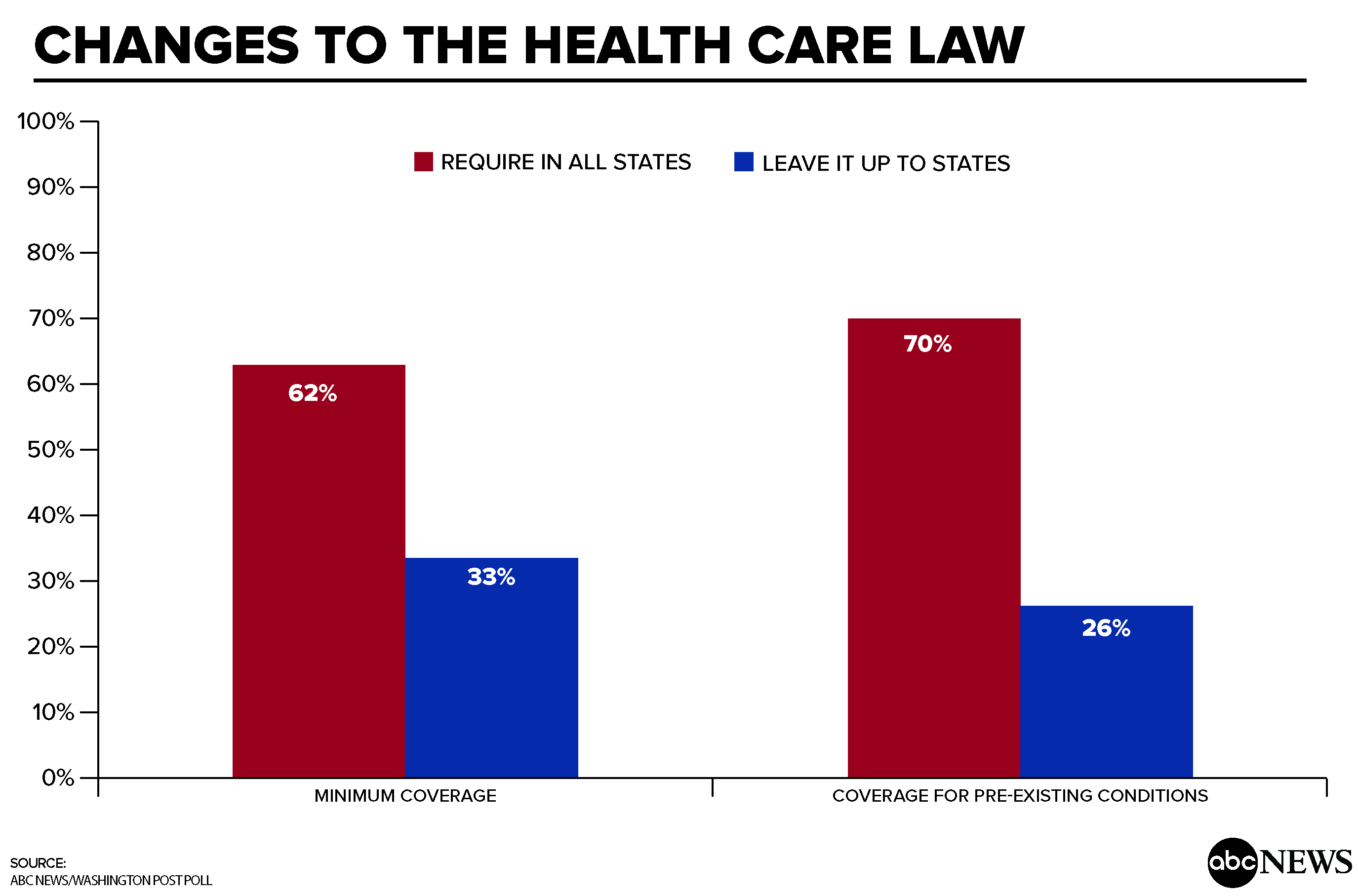 Even among Republicans and conservatives, majorities support a nationwide standard for coverage of pre-existing conditions (54 and 55 percent, respectively). A narrow majority of conservatives (53 percent) and a substantial share of Republicans (46 percent) also support a national standard for minimum coverage in this poll, produced for ABC by Langer Research Associates.

Further, just 20 percent of conservatives, a quarter of Republicans, and 28 percent of Trump’s own voters say he should try to encourage failure of the existing law.

In an additional expression of support for the law, Americans by 43-26 percent say they’d rather see Trump work with Democrats than with conservative Republicans in Congress to change it. Twenty-four percent prefer him to work with both.

These results reflect near-universal sentiment among Democrats in favor of the law, majority preference among independents and moderates to keep and improve it, and, as noted, divisions within the GOP and related groups. 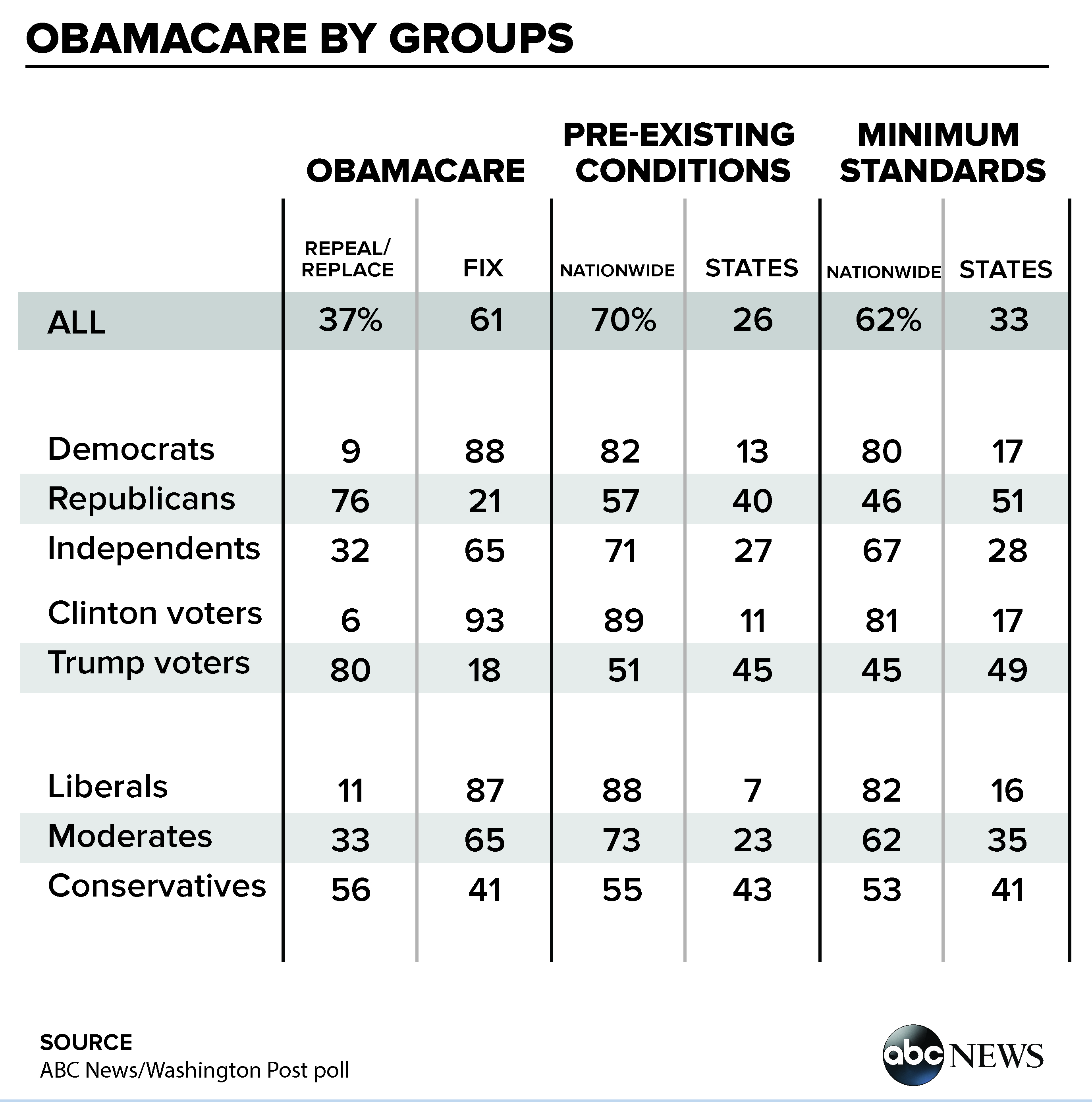 There are similar partisan and ideological patterns in support for the key Obamacare provisions tested, nationwide coverage for pre-existing conditions and minimum coverage standards. Large majorities of Democrats, independents, liberals and moderates support these, while Republicans, conservatives and Trump voters are more closely divided.

Similarly, it’s notable that even among Republicans and Trump supporters, only about half favor Trump working with conservative congressional Republicans rather than with the Democrats in Congress on health care. The rest in these groups say he should work with both (30 to 35 percent) or with the Democrats (14 to 11 percent).

Among other groups, support for a nationwide standard for covering pre-existing conditions peaks at 78 percent among 50- to 64-year-olds, the age group most likely to need care but generally lacking access to Medicare. Support for this standard is lowest, but still at 62 percent, among under-40s.

In terms of nationwide minimum coverage requirements, support is lowest, 49 percent, among Medicare-covered seniors, vs. 66 percent among all others.

In another age gap, repeal and replace is least popular among under-40s (30 percent) vs. 40 percent among those 40 and older. Support for repeal also rises with income, from 31 percent among those in less than $50,000 households to 41 percent in those with higher incomes.

Men are 7 points more likely than women to favor repeal, and 9 points less likely to support nationwide minimum coverage requirements. Finally, in one of the sharpest splits (beyond partisanship and ideology), nearly half of whites support repealing and replacing the law, while only 16 percent of nonwhites, including 11 percent of blacks and 15 percent of Hispanics, agree.

This ABC News/Washington Post poll was conducted by landline and cellular telephone April 17-20, 2017, in English and Spanish, among a random national sample of 1,004 adults. Results have a margin of sampling error of 3.5 points, including the design effect. Partisan divisions are 31-24-36 percent, Democrats-Republicans-independents.

The survey was produced for ABC News by Langer Research Associates of New York, New York, with sampling, data collection and tabulation by Abt Associates of Cambridge, Massachusetts. See details on the survey’s methodology here.