Politics of Death: The Mapmaker Who Finds the Bodies in Ethiopia’s Land Battle

LONDON (VOA News) — It was late 2015 when Endalk Chala began documenting deaths in his home country of Ethiopia, scouring Facebook, Twitter and blogs to piece together who had died and where.

Chala comes from Ginchi, a town 72 km (45 miles) from Addis Ababa where protests began in November 2015, initially over a government plan to allocate large swathes of farmland to the capital city for urban development.

The plan would have displaced thousands of Oromo farmers, the largest ethnic group in Ethiopia.

“There were reports that people were killed in the protests and no one was reporting about it. No one cared who these people are,” Chala told Reuters by phone. “The information was all over the internet, not well organized. I just wanted to give perspective.”

While the land re-allocation project was officially scrapped by authorities, protests and conflict reignited over the continued arrest and jailing of opposition demonstrators with full-scale protests over everything from Facebook to economics.

Several hundred protesters were killed in the next 11 months. Then, in October 2016, the government declared a state of emergency and shut down communications, including the internet.

More than 50 people died at a single demonstration that month, after a stampede was triggered by police use of tear gas to disperse anti-government protesters at a religious festival.

A government report presented to parliament in April acknowledged a death toll of 669 people — 33 of them security personnel — although activists believe it could be much higher.

The government shutdown of the internet for periods of time all but ended online contact across Ethiopia, leaving it to the Ethiopian diasporas to pull together the facts.

Enter Chala, a Ph.D. student in Oregon, in the United States, who decided to log every death he could on an interactive map, inspired by a similar Palestinian project. 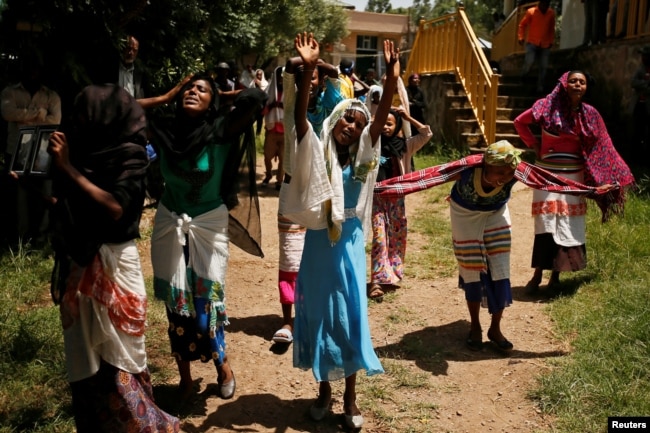 FILE – Women mourn during the funeral a construction engineer who died during a stampede after police fired warning shots at an anti-government protest in Bishoftu during Irreecha, the thanksgiving festival of the Oromo people, Oct. 3, 2016.

Once word spread that Chala was collating the death, Ethiopian friends and activists began to send details, including photographs of those injured and killed. They contacted Chala via social media and instant messaging applications like Viber.

Chala learned that Ethiopians in rural areas were driving miles to put evidence of the killings online, but he still feared there were information black holes.

In its report of 669 deaths presented to parliament, the Ethiopian Human Rights Commission — which works for the government — blamed protesters for damaging land and property.

In the report, seen by Reuters, the Commission said the disturbances had damaged public services, private property and government institutions. It also cited harm to investment and development infrastructure.

However, the United Nations High Commissioner for Human Rights, Zeid Ra’ad al-Hussein, criticized the government for a lack of accountability and called for access to protest sites.

In a country where fear of reprisals is commonplace, it is easier for those living outside Ethiopia to speak out, said Felix Horne, Ethiopia researcher at Human Rights Watch.

“Any time victims of human rights abuses share information with outside groups, with journalists — either domestic or international — there’s often repercussions, quite often from local security officials,” he said.

Horne said Facebook was a key source of information in the early stages of the protests but this was quickly seized on by the government, and security officials checked students’ phones.

Last month, an opposition politician was sentenced to six-and-a-half years in prison because of comments he wrote on Facebook.

Horne, whose organization also attempted to document the deaths, agreed that numbers are important for accountability, but said a focus on the deaths toll alone can be dehumanizing. 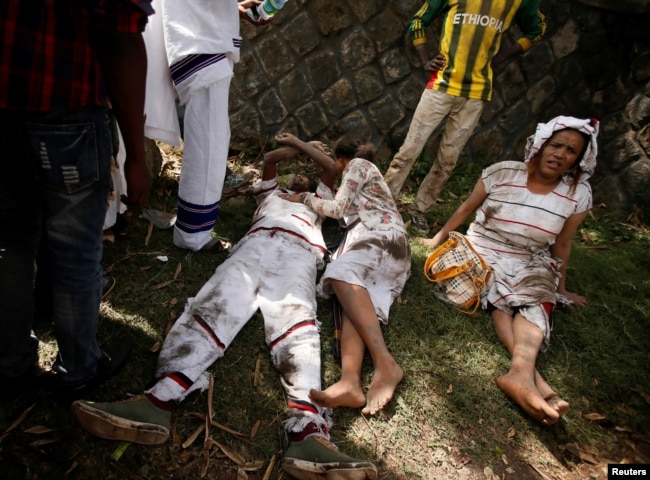 FILE – Injured protesters wait for help after several people died during the Irrechaa, the thanksgiving festival of the Oromo people in Bishoftu town of Oromia region, Ethiopia, Oct. 2, 2016.

“We’ve talked to so many people who were shot by security forces. Many of them children. Many of them students. The numbers sort of dehumanizes these individuals.”

Speaking to Reuters by phone from Kenya, his new home, he recalled how a soldier fired directly on a car in Aje town, West Arsi, on February 15 last year. Five people were shot, two died and three were wounded, he said.

Six months later, on August 6, Benta was participating in another protest in Shashamane in the Oromia region, when he saw four people shot. He says he was detained and tortured for nearly two months and has now made a new life in Nairobi.

“If you’re expressing your freedom, you’ll be shot, and if you’re asking for your rights, you’ll be detained,” he said.

Chala said bullet wounds were the most common injuries visible on the photos that flooded in to him from Ethiopia, and the brutality he witnessed has stayed with him.

“It really hit me very hard,” he said. “People will forget. They’ll bottleneck their emotions and grievances and the government will just extend and buy some time, and there will be another bubble sometime in the future. That’s a vicious circle.”