A stubbled crater attests to a recent artillery barrage, but with its bustling streets and shops, the highland Ethiopian city of Mekelle has an air of relative peace.

Then the stories start spilling out.

(nytimes)—Of the hospital that begins its days with an influx of bodies bearing gunshot or knife wounds — people killed, relatives and Red Cross workers say, for breaching the nightly curfew.

Of the young man who made the mistake of getting into a heated argument with a government soldier in a bar. Hours later, friends said, four soldiers followed him home and beat him to death with beer bottles.

Of a nightlong battle between government forces and local militia fighters in a nearby town and its aftermath, when soldiers returning to collect their dead stormed into nearby homes, firing indiscriminately.

“I’m lucky to be alive,” said Alefesha Hadusha, her head swaddled in bandages, as she gave a whispered account in a hospital ward. Her parents and two brothers were killed instantly in the attack, she said. An X-ray by her bed showed the bullet lodged in her head. 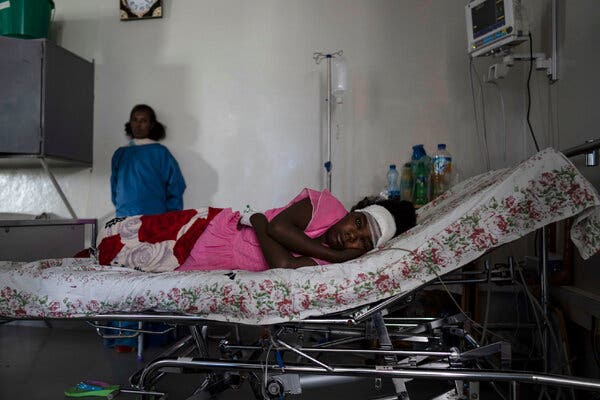 When Ethiopia’s prime minister, Abiy Ahmed, began a sweeping military operation in the restive region of Tigray on Nov. 4, he cast his goal in narrow terms: to capture the leadership of the region’s ruling party. The party, the Tigray People’s Liberation Front, had brazenly defied his authority for months, and then attacked a federal military base.

But four months on, the operation has degenerated into a bitter civil conflict marked by accounts of egregious rights violations — massacres, sexual violence, ethnic cleansing, and fears that starvation is being used a war tactic — that have set off alarm across the world.

In Mekelle, the region’s biggest city, many Tigrayans say they feel that they, not their leaders, are the true targets of Mr. Abiy’s military campaign.
Hospitals are filled with casualties from the fighting that rages in the countryside, many of them terrified civilians arriving with grievous wounds.

Schools house some of the 71,000 people who fled to the city, often bringing accounts of horrific abuses at the hands of pro-government forces. 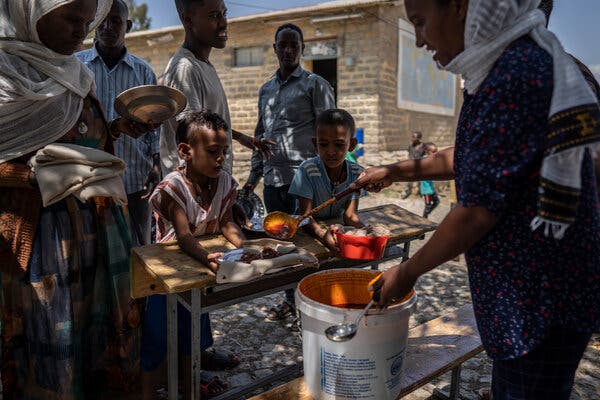 A palpable current of fear and resentment courses through the streets, where hostilities between residents and patrolling government soldiers often erupt into violence.

“We don’t say that everything was perfect under the T.P.L.F.,” said Assimee Misgina, a philosophy lecturer at Mekelle University, referring to the Liberation Front. “But this is a war against the people of Tigray. Basically, we are under an existential threat.”

Mr. Abiy, who won the 2019 Nobel Peace Prize, denies responsibility for any atrocities, and United Nations officials say that all sides including the T.P.L.F. may have committed war crimes.

But the majority of serious accusations have been aimed at government troops and their allies — the ethnic Amhara militias that moved into the western part of Tigray, and soldiers from Eritrea, Ethiopia’s northern neighbor and one-time enemy.

Mr. Abiy’s spokeswoman and the head of an Ethiopian government task force dealing with the crisis in Tigray did not respond to a list of questions or repeated requests for comment for this article.

In Mekelle, captured by government troops on Nov. 28, residents have learned to toe the government line, even if the nearest battleground is 60 miles away.

The interim president of Tigray, Mulu Nega, holds court in a luxury hotel where federal soldiers stand guard by the entrance. The internet has been shut down since November.

In late February, when the authorities permitted a rare visit to Mekelle by international reporters, Tigrayans flocked to the hotels where journalists were staying, desperate for news of the outside world — and to tell their own stories.

In the lobby of the Northern Star hotel, Berhane Takelle, the manager of a garment factory, produced a video that showed the remains of his business in Adwa, 100 miles to the north — charred machinery, a destroyed roof and garments strewn across an empty factory floor. It was all that remained, he said, following a series of violent raids by plundering Eritrean soldiers.

“They took everything,” Mr. Berhane said, shaking his head.

At the city’s main hospital, the Ayder Referral hospital, officials said they received the bodies of 250 men, ages 20 to 35, between Nov. 28, when Ethiopian soldiers seized Mekelle, and March 9. Four-fifths of the bodies had gunshot wounds, and the remainder had been injured with knives, said a senior official who spoke on condition of anonymity to avoid reprisals. 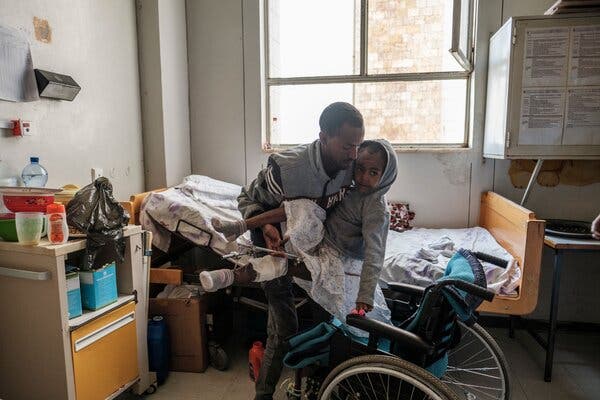 Most of the attacks appeared to have been carried out by government soldiers, he added.

One morning, three young men gathered in the morgue to identify the body of Getachew Tewolde, 26, the friend whom soldiers beat to death with beer bottles.

The soldiers who killed Mr. Getachew had a day earlier accused him of supporting the opposition. “They said he belonged to the junta,” said Kidanu Gidey, using a euphemism for the T.P.L.F.

But Mr. Getachew was a laborer, not a political leader, his friends said.

Even more harrowing accounts came from outside the city.

The attack in which Ms. Hadusha’s family was killed took place near the town of Abiy Addi, in central Tigray, on Feb. 10.

One 26-year-old man, Berhe, offered a similar account of that day, saying that his brother and seven other men were picked up and taken to a military camp and executed. He asked to use only his first name, fearing reprisals.

A surgeon who treated the wounded showed a photo of a young man with cratered eyes — shot through the temple at close range, apparently in an attempted execution, the surgeon said.

An aid worker with an international group working in that area, speaking on the condition of anonymity to avoid compromising the work, confirmed that attacks on civilians had taken place near Abiy Addi on that date.

The violence, the aid worker said, was typical of a conflict where the worst atrocities often occur in the aftermath of battle. 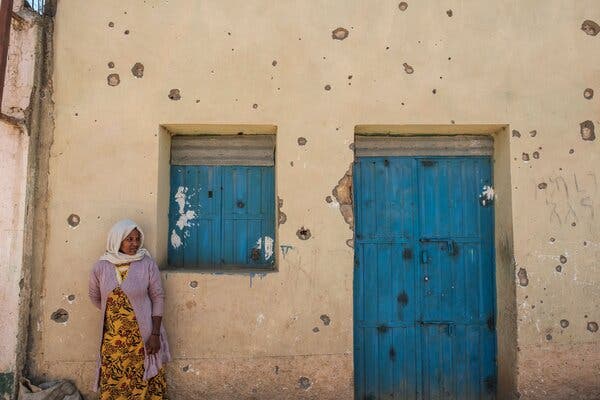 A spokesman for the Ahmara regional government told Bloomberg this week that it was pressing to officially incorporate western Tigray into Amhara.

In late February, Prime Minister Abiy said that he took the “safety, security and well-being of all Ethiopian citizens very seriously” and that he was ready to cooperate with any joint investigation of abuses with “relevant human rights bodies.” On Wednesday, the opening of an investigation was approved by the U.N.’s Office of the High Commissioner for Human Rights

In testimony to Congress last week, the United States secretary of state, Antony J. Blinken, called the situation in Tigray unacceptable and reiterated calls for Eritrean troops to withdraw immediately.

“They need to come out,” Mr. Blinken said.

Mr. Mulu, the interim leader of Tigray, cuts a lonely figure in Mekelle. An ethnic Tigrayan installed by Mr. Abiy nine days into the war, he lives and works from a suite at the Axum Hotel where he is trying to trying to restart Tigray’s war-battered bureaucracy.

Unlike Mr. Abiy, Mr. Mulu does not deny the Eritrean presence in Tigray. And in an interview he said he had initiated his own investigation into reported atrocities.

“It’s not acceptable that people should die like this,” he said. “But we need evidence. We have requested our security forces to investigate it.”

Tigray’s health services, once among the best in Ethiopia, have been ravaged. On Monday, Doctors Without Borders said that dozens of clinics across the region had been destroyed and plundered by soldiers, often deliberately. 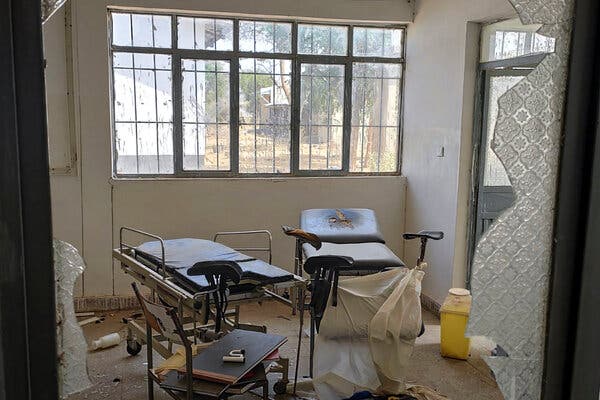 Berhanu Mekonnen, head of the Ethiopian Red Cross in Tigray, said in an interview that Eritrean soldiers had killed seven of his workers including a driver who was dragged from his ambulance and shot.

The Red Cross’s fleet of 254 ambulances in Tigray has been reduced to 30, Mr. Berhanu added. Most were seized by soldiers or destroyed in fighting. Those still in use are often hidden behind churches or dense vegetation to prevent Eritrean soldiers stealing them, he said.

The battle is also one of narratives.

The government frequently accuses critics and foreign news outlets of falling for T.P.L.F. propaganda, a charge made by supporters of Mr. Abiy who recently demonstrated in New York outside the offices of The Times.

In Washington a day earlier, a senior diplomat at the Ethiopian Embassy quit his job over the reports of atrocities in Tigray, accusing Mr. Abiy of leading Ethiopia “down a dark path toward destruction and disintegration.”

Inside Tigray, soldiers detained Ethiopian translators and reporters working for four international outlets, including The Times, last month. The men were released without charge days later, but by then most foreign reporters had been forced to leave Tigray.

In such a fraught environment, even massacres are contested.

Mr. Abiy’s officials frequently cite a massacre in Mai Kadra, a town in western Tigray, on Nov. 9, as an example of T.P.L.F. war crimes. Witnesses cited in an Amnesty International report blamed the deaths on Tigrayan fighters.

But at a camp in Mekelle, eight residents of Mai Kadra said the killings had in fact been carried out by the Fano, an ethnic Amhara militia group with a reputation for brutality, and insisted that the majority of victims were Tigrayans.

Solomon Haileselassie, 28, said he watched the slaughter from his hiding place in a garbage dump. “I saw them cut off people’s legs and arms with axes,” he said.

Fisseha Tekle, Amnesty International’s Horn of Africa researcher, said the group had received credible new evidence of Tigrayan deaths, but stood by the finding that the majority of victims were Amharas.

Restricted access and the “high politicization of violence” make it hard to establish the truth about much of anything in Tigray, Mr. Fisseha added.