WASHINGTON DC-  (VOA News) — On June 5, Saudi Arabia and its allies, including Egypt, the United Arab Emirates and Bahrain, cut diplomatic ties with Qatar, accusing it of funding extremist groups such as the Muslim Brotherhood and Islamic State.

In response, Qatar said it was the victim of a policy of “domination and control” by its larger neighbor and that Saudi Arabia was, in fact, the one responsible for backing extremism.

So what is the truth? Fundamentalist strains of Islam, including Saudi-born Salafism and Wahhabism, form the ideological bedrock for most terror groups. According to a study by Leif Wenar of King’s College London based on the Global Terrorism Database, three out of four terror attacks in the last 10 years have been conducted by people espousing Salafist ideology.

Wenar said Saudi Arabia is the chief exporter of Salafism around the world, spending tens of billions of dollars to build mosques, fund madrassas, finance preachers and offer scholarships to students to study the rigid form of Islam.

The effort is possibly the most expensive ideological campaign in human history, Wenar told VOA.

“Saudi Arabia is not the only factor, of course, in the spread of violent extremism. But for 50 years Saudi Arabia has been funding schools and mosques and radical preachers worldwide who have set down their particular narrow and puritanical version of Islam, which has in many places mutated into the violent extremism we see today,” Wenar said.

Saudi Arabia said it has changed, stating publicly that it wants to take a hardline stance against radical Islam. In May, it welcomed 50 world leaders to Riyadh to commemorate the opening of a new Global Center for Combating Extremist Ideology. It said it has also increased oversight of charitable organizations that may be linked to terrorism.

Ali Shihabi, executive director at the Arabia Foundation, a Washington-based think tank, said that since the terrorist attacks of September 11, 2011, Saudi Arabia has become a world leader in fighting terror. 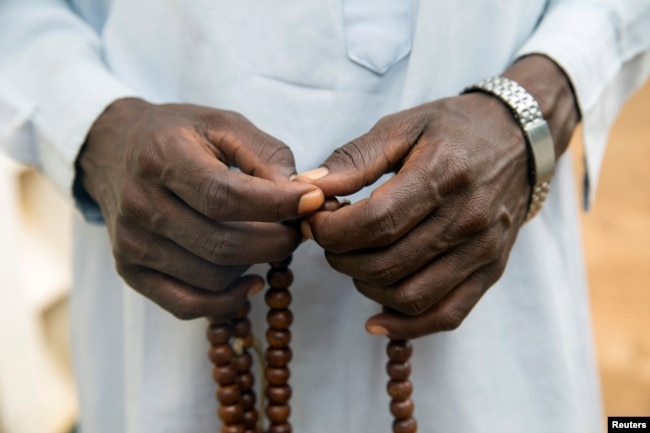 FILE – A Muslim holds Prayer beads outside a mosque in the town of Koui, Central African Republic, April 27, 2017.

Shihabi draws a line between the “quiet Salafism” spread by Saudi religious organizations that teach respect for authority and rejects violence and the “revolutionary Salafism” that promotes attacks on authorities and non-believers.

“There’s a fundamental disconnect between Salafism as it is practiced in Saudi Arabia and the Salafism that terrorists have used or misused for their own purposes,” Shihabi said.

The impact of Saudi Arabia’s support of conservative Islam is felt across the African continent. Hussein Solomon of the University of the Free State in South Africa has studied the phenomenon and said Africa’s traditional Sufi form of Islam has been steadily pushed out of some countries in favor of Salafism.

This has given an ideological backing to terror groups who reject Sufi mysticism and forbid things like secular music, Western-style clothing and women speaking to unrelated men.

In some countries, such as Mali, Salafists have conducted attacks against non-Muslims or Muslims they consider to be heretics.

Saudi Arabia, Qatar and the United Arab Emirates offer scholarships to young Africans to attend religious schools in the Gulf states. According to a report by the Africa Center for Strategic Studies, the number of East African students enrolled in Gulf state universities has grown from several hundred in 2010 to nearly 10,000 in 2014.

Solomon said he has interviewed parents whose children have returned home from these schools with radically changed, hardline views.

One Malian boy came home and denounced his father for listening to music and smoking cigarettes, and his mother and sisters for not wearing a full hijab. “It caused tremendous ruptures just inside the family,” Solomon said.

Saudi Arabia has also built hundreds of mosques around the continent. Solomon said the divisive form of Islam taught in these mosques has caused tension between Muslims and Christians in areas where they live side-by-side.

“Part of the deal in terms of the construction of the mosques is that the Imam either comes from Saudi Arabia or [is] trained by the Saudis and is given a syllabus in terms of what to say and what to preach, and, of course, this is an ill-effect to a continent like Africa which is multi-ethnic, multi-racial and certainly multi-religious,” he said.

Wenar said he has also reviewed textbooks published in Saudi Arabia that compared Christians and Jews to animals and taught children that they are prohibited from befriending infidels.

“This really is quite an archaic and extreme ideology that the Saudis have been sending, and it seems [that] to check it, we should make the world more aware of what’s going on,” he said.

Shihabi said the rise of Islamic extremism in some African countries is not a result of textbooks or what is preached at Saudi-funded mosques. Mainly, he believes, extremists twist religious doctrine to fit their own local, political purposes.

“And people realize that if you want to be a revolutionary today and you want to attract attention, you put on this Islamic cloak, and it gets you much more attention than if you just package yourself as a domestic player with no transnational reach,” he said.

In a recent New York Times story, William McCants, a Brookings Institution scholar, accused Saudi Arabia of being “both the arsonists and the firefighters” when it comes to Islamic extremism.

Shihabi argues that is no longer the case. “Saudi Arabia may have been… an accidental arsonist in ways in the past if part of its ideology was misused, but now it has certainly become a very dedicated fireman, and it’s been doing that for the last fifteen years.”