(CNN) — What sets Ethiopia apart from its African neighbors?
The excellent coffee?
The fact that it was never colonized?
Or that Rastafarians regard it as their spiritual home?
Or could it be the smooth, well-maintained roads, so rare on the continent, that make exploring the country by car such a joy?
After a 1,430-kilometer drive through Ethiopia’s Northern Circuit — up mountains, through Mars-like landscapes, into lost kingdoms of yore — we found 10 crucial things that define the country.

1. The best Italian restaurant in the world (according to Bob Geldof, anyway)

The buzzing bedlam of Mahatma Gandhi Street in Addis Ababa, Ethiopia’s capital, is the setting for Castelli’s — arguably the best Italian restaurant this side of Bologna.
An Italian soldier, Francesco Castelli, founded the modest-looking eatery at the end of WWII. Since then it’s gained a global profile thanks to endorsement from celebrity diners such as Bob Geldof, Bono and Brad and Angelina.
But, high-profile praise aside, it’s the food that makes Castelli’s worth a visit before setting off from Addis into the Ethiopian wilds.
Ristorante Castelli, Mahatma Gandhi Street, Addis Ababa. Tel: +251 1 563 580, +251 1 571 757 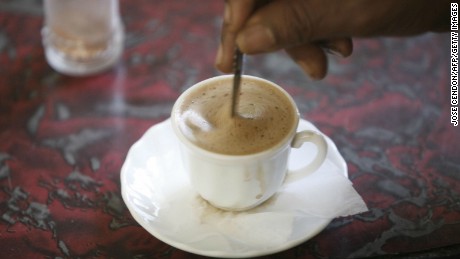 Come on, stir it up.

Like great Italian food, coffee is one of the legacies of the Italian occupation of Ethiopia during WWII.
While Mussolini’s men proved inept colonists (the Allies defeated them in 1943), their tenure in the country did at least ensure that an Italian-style espresso machine was installed in most cafes, restaurants and — weary travelers will be pleased to know — even dilapidated roadside shacks.
Ethiopians love their coffee and take pride in the fact that the plant’s invigorating effects were first discovered in the Oromia region of the country (see the 2006 documentary Black Gold). 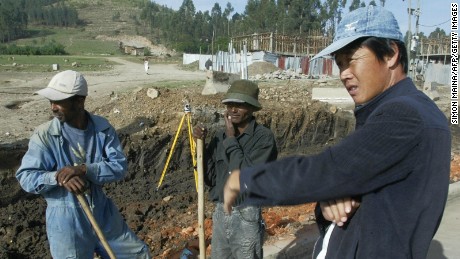 China has invested billions of dollars in Ethiopia’s infrastructure.

Made in China. Actually made by China. The country is investing hundreds of millions of dollars in Ethiopia’s infrastructure.
Aside from coffee and pasta, Ethiopia excels in roads.
Other African nations have roads — it’s just that few are a patch on those in Ethiopia.
The quality tarmac comes courtesy of huge Chinese investment — in the ten years to 2016, it was estimated that China had poured $21.52 billion into Ethiopia’s infrastructure.
Anyone who’s driven into Ethiopia from Kenya, via the perilous Marsabit route (fraught with bumps, brigands and bandits) will attest to the difference a nice road makes.
Ethiopia’s incredible mountain-top highway vistas don’t hurt, either.
MORE: Lalibela, Ethiopia’s New Jerusalem 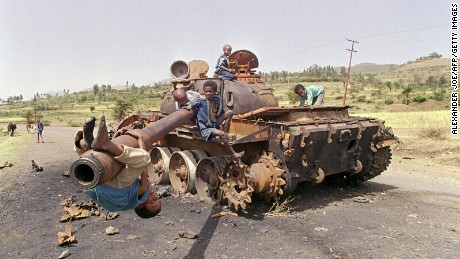 A barrel of fun.

Swords into ploughshares … or tanks into unusual climbing frames for kids, in the case of Ethiopia.
Don’t worry: unless you get horribly lost and venture into Somalia, the tanks you’ll see along the roadside are burned-out remnants of the Eritrean-Ethiopian War (1998-2000).
Seen throughout the country, these defunct war machines stand as forbidding reminders of Ethiopia’s troubled past — and double as fun climbing frames for local children. 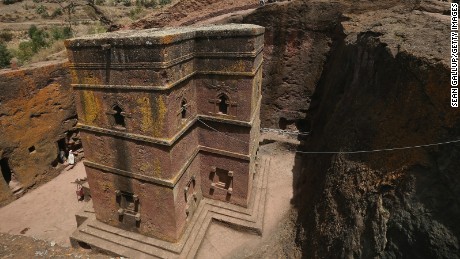 Hewn out of solid rock.

Lalibela’s monolithic churches still impress nine centuries later.
Ethiopia sags under the weight of its cultural treasures, such as those at the UNESCO World Heritage site Lalibela.
In the late 12th century, Gebre Mesqel Lalibela had 13 churches — Ethiopia is one of the oldest Christian nations — carved out of solid rock.
His achievement (meaning that of his stonemasons and slaves) is still incredibly impressive nine centuries on.
Lalibela — the first major point of interest on the Northern Circuit — is a 10-hour journey from Addis Ababa.
Head north up Route 1, passing through Debre Birhan, Kombolcha and Dessie. At Weldiya, leave the highway and follow the road west to Gashena.
At Gashena, take the road north to Lalibela. 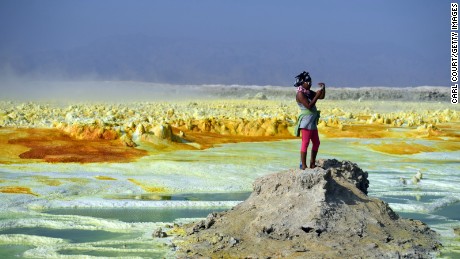 The stark beauty of the Danakil Depression.

“The cruelest place on Earth?” Pretty, though.
Located in the tumultuous Afar region on the Eritrean border, the Danakil Depression is strewn with volcanoes and salt lakes and is one of the hottest places on the planet.
So why visit what National Geographic calls “the cruelest place on Earth?”
Well, this also happens to be one of the most arresting natural sights you’ll see in Africa — or anywhere else.
With an unforgiving landscape that’s difficult to navigate, it’s also one of the few places in Ethiopia where you shouldn’t travel alone: most people go with an escort or in a convoy.
Tours can be arranged in Abbis Ababa. Reputable agency Ethio Travel and Tours charges around $600 for a four-day trip. 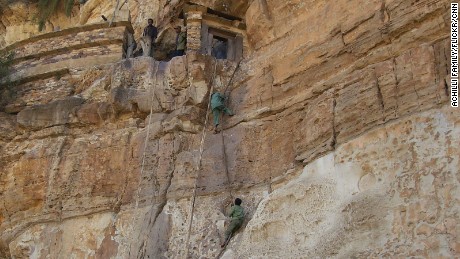 Watch your step on the way up to Debre Damo.

Debre Damo houses some of the most ancient Christian scripture in Africa. Gentlemen: you’ll have to describe it to the ladies.
Just off the main road between Lalibela and Aksum lies Debre Damo, a monastery that can be reached only by scrambling up a 15-meter-high cliff face.
There is, however, a discriminatory door policy: only men are permitted to make the perilous ascent to the monastery.
That rule doesn’t apply just to female humans — even livestock of the fairer sex apparently risk distracting the monks from holy contemplation.
Gents who brave the climb can enjoy stunning vistas, as well as a chance to eye some of the most ancient Christian scripture in Africa.
Be warned that unofficial “guides” will try to extort inflated fees for their services before letting you back down the cliff — negotiate the charge beforehand.
It’s practical to visit Debre Damo en route to Aksum.
The monastery lies just outside the small town of Bizet, 12 hours’ drive north of Addis and about 50 kilometers west of Adigrat, the last stop on Route 1 before turning west on to Route 15.
Follow the road to Bizet and keep a keen eye out for the turn to Debre Damo on the right.
MORE: Rare color images of a lost North Africa

8. The Ark of the Covenant 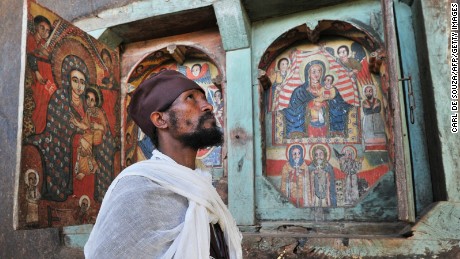 Is Ethiopia the final resting place of the Ark of the Covenant?
The Lost Ark? In Ethiopia?
Someone should have told Indiana Jones that before he set off for Cairo.
According to enthusiastic local sources, the historic town of Aksum — focal point of the Aksumite Empire (AD 100-940) — is the resting place of the Ark of the Covenant.
The catch? No one’s actually allowed to see it.
The closest you can get is by paying a few dollars to one of the tracksuit-clad men posturing as guards outside the temple where the ark is purportedly kept.
Luckily, Aksum is home to plenty of ancient tombs and other monuments, which makes the drive to one of Ethiopia’s northernmost towns worthwhile — ark or not.
Though Aksum can be reached by a small road west of Mek’ele, people wanting to visit Debre Damo monastery as well should take Route 1, turning west on to Route 15 at Adigrat, and join Route 3 at Adwa. 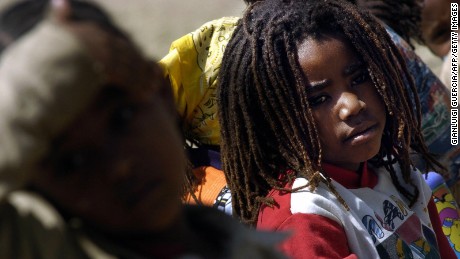 A child of Jah.
The Rastafari movement is most often associated with Jamaica, but it was Ethiopian emperor Haile Selassie who inspired the religion.
Ethiopians are proud of their former ruler’s supposed status as Jesus incarnate and some have adopted the dress and lifestyle habits of their Jamaican counterparts — which makes meeting them in the Simien Mountains all the more bizarre.
The roadside Rastas you’re likely to meet are a friendly bunch, who’ll happily talk you through points of interest in the area (often relating to high cliffs off which Italian soldiers were thrown), as well as hawking red, green and yellow hats and accessories. 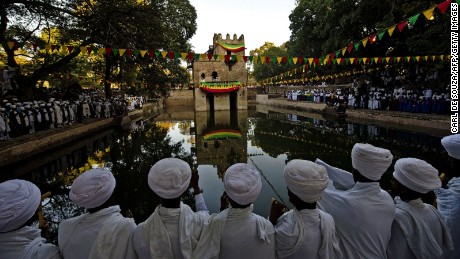 Fairy tale fasilides.
British and Dutch colonial buildings attract the most architectural attention in east Africa, but Ethiopia again stands out as the only country on the continent with its own fairy tale castles.
Aside from a few eye-catching art deco buildings left over from the Italian occupation, the castles of Fasilides, Iyasu and Mentwab, in the former imperial capital of Gondar, are the structures that stay in the mind.
Gondar is a five-hour drive southwest of Aksum. Follow Route 3 through the Simien Mountains.
A good stopping point is Debark, with its mountain vistas.
Editor’s note: This article was previously published in 2013. It was reformatted and republished in 2017.